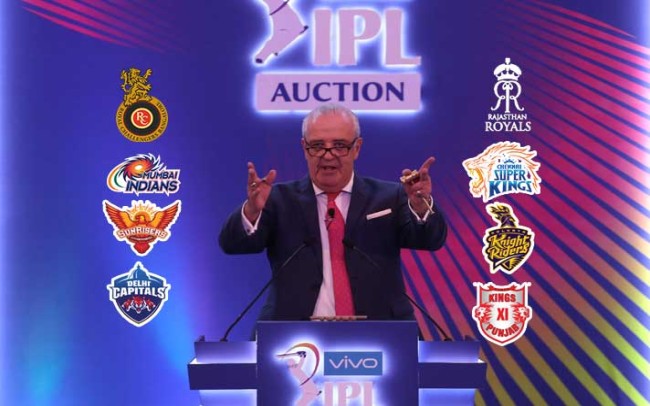 The IPL-2022 mega auction will take place in a bio-secure bubble amid challenging COVID-19 pandemic in India. On February 05th (Saturday), the IPL-2022 representatives of almost all teams (ten) have entered ‘Bio-Bubble’ in Bengaluru.

The IPL franchises are conducting ‘AUCTION SIMULATION’ at the venue to get accustomed to the IPL Auction Rules & prepare themselves for eventualities.

IPL team representative from Ahmedabad IPL Team said, “We are in Bengaluru, conducting AUCTION SIMULATION. We will be fully prepared for the auction”.

A total of 590 players have been shortlisted for the mega auction from the 1214 players that registered initially. A total of 370 Indian players and 220 overseas players will be up for grabs in what promises to be an action-packed IPL 2022 Player Auction in Bengaluru.

BCCI treasurer Arun Dhumal has confirmed the person who will be orchestrating the IPL-2022 auction. He confirms Hugh Edmeades to return as auctioneer in IPL-2022 mega auction in Bengaluru.

BCCI treasurer has confirmed that Hugh Edmeades, who has been the IPL auctioneer since taking over from Richard Madley in 2019, will be back for the IPL 2022 auction. Dhumal said, “Hugh Edmeades will be back as the auctioneer. He did a good job last time and will do it again”.

Hugh Edmeades said, “I haven’t taken many auctions that last as long as the IPL ones. It is amazing how the adrenaline kicks in and sees me through to the end. With the 2022 auction being a two-day affair, no doubt I will have a good sleep on my flight back to London on the 14th February.”

He further added, “I am looking forward to welcoming the Lucknow and Ahmedabad bidders in Bengaluru. My life is made a lot easier by the fact that the bidders know exactly what they are doing and make their bids very clear to me”.

BCCI handed the rule-book to all 10 IPL teams:

The auction will take place in a strict bio-secure bubble amid challenging COVID-19 scenarios in the country. BCCI has asked franchises to follow these 10 Rules.

Meanwhile, the BCCI is expecting a windfall from the media rights deal ahead of the IPL-2022. Several networks, such as Sony Sports Network, global giants Disney Star Network, Reliance-Viacom 18 and Amazon among others, are in the fray to grab the IPL Media Rights.

The Indian cricket board will sell the television and digital telecast rights of the IPL for four years – between 2023 and 2027 – through an e-auction likely in the last week of March. The Invitation to Tender (ITT) could be floated before February 10th-2022. The e-auction will then be conducted within 45 days of floating the ITT.