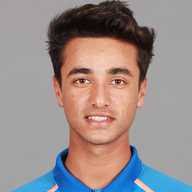 Abhishek Sharma led India U19 to the Youth Asia Cup title in December 2016, doubling up as tournament’s second-highest wicket-taker, and was a crucial member of the side that lifted the 2018 ICC U19 World Cup later in New Zealand. within the 2018 IPL auctions, Sharma was sold to Delhi Daredevils for INR 55 lakh. … Read more