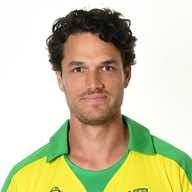 Nathan Mitchell Coulter-Nile is an Australian fast bowler, who represents Western Australia and Perth Scorchers in their domestic circuit. He started representing Western Australia at both U-17 and Under-19 level and within the 2003-04 National Under-17 championship, he took 4 wickets in 5 matches. A member of the Dennis Lillee Fast Bowling Academy, Coulter-Nile was selected to the Australian national under-19 team in three under-19 ODI matches against the Pakistan under-19s in April 2007. He later played a season for Fremantle, where he took 30 wickets and also appeared during a single match for Cricket Australia Cup for the state second XI team. At the top of the 2012–13 season, Coulter-Nile collected 26 Sheffield Shield wickets and was awarded the Laurie Sawle Medal as Western Australia’s player of the season.