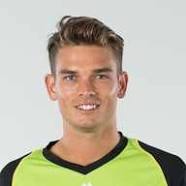 Chris Green is a South African-born Australian cricketer who plays the role of an all-rounder. Chris comes from a sports background where his father Warren Green and mother Lisa Green both were a professional tennis player. Therefore, Chris from the beginning used to play various sports like soccer, tennis, cricket, and swimming.

His major breakthrough in the field of cricket has finally come when he got selected to play in the Indian Premier League 2020 where he has been bought by Kolkata Knight Riders for INR 20 Lakh.

So far Chris Green has got chances only to play the domestic side of cricket in Australia but his talent and ability to perform excellently under pressure will soon call him up for playing international cricket.

He has been recently banned for three months when he was found taking illegal bowling action while playing in the Big Bash League 2020.

Christopher moved to Australia along with his family when he was 7 years old. Initially, he began playing cricket for St. Ives Club in North Shore while attending the Syndey’s Knox Grammar School. As a kid, he excelled in both cricket and Tennis on the junior level. But eventually, when he had to choose between the two Chris opted for the former and selected cricket as his major.