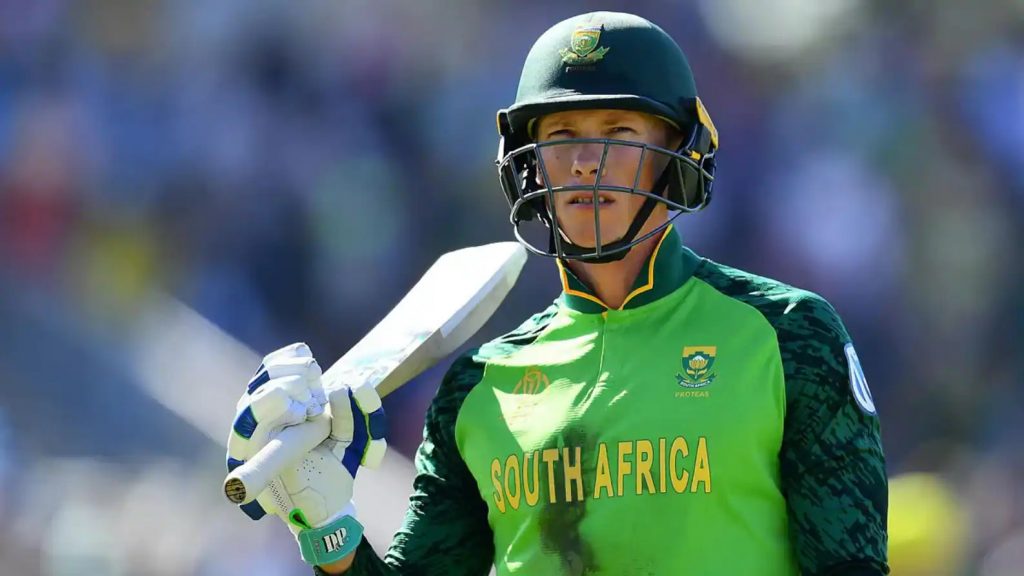 A man in China ate a bat in late 2019 and the rest of the world paid the consequences of it. The coronavirus spread like a wildfire across the globe and the world got changed. For a good or bad is debatable, but the virus took millions of lives with it.

The pandemic hit everything hard and the world came to a standstill. The magnitude of the pandemic was so heavy that it changed everything. And changed every sport as well. And cricket wasn’t reprieved either and faced severe consequences as well.

Now, the cricketers live in a bio-secure environment whenever they play in any competition. And the life inside a bio-bubble isn’t either and has its mental toll on cricketers as well. Several cricketers have called this way of living extremely hard. And several casualties have come up so far.

We have had a look inside the bio-bubble of the South African cricket team that is in the UAE for the T20 World Cup.

Rassie van der Dussen asks his wife, Lara, “What are we watching?”

“No, not too much at the moment. We’re in between series so you’ve caught me at a difficult time,” she replied.

They don’t have much to keep up with. Hence, Netflix is becoming a saviour for them as well.

“I’m sure in the next few days I’ll put some time into thinking about it. It’ll be a series, we tend to fall asleep in front of movies,” van der Dussen said.

Talking about himself and his wife Lara, who is a teacher by profession, van der Dussen appreciated the reception they are getting.

“We’re very well looked after. We do spend a lot of time in the room, but we have a big TV and a lovely living space. You’ve got to keep active, obviously. I’ve got lots of fitness toys to play with and there are facilities in the hotel,” he said.

The gym area on the bottom floor of the hotel doubles as a team room and medical area. Keshav Maharaj admits it’s not the ideal makeshift setup.

“It is what it is. There are a lot of differences so I work hard to make myself feel as at home as possible. I am a very clean and tidy person. I like neatness. There’s nothing worse than an untidy room and scruffy sheets. It really drives me mad,” said Maharaj.

“With no cleaners coming into the rooms I spend time making myself more comfortable by keeping my room in check.”

The team have a cordoned-off dining area in the hotel room in which they eat, drink coffee and watch sport together.

The team gathering tells that this South African team is capable to do wonders.

Keshav Maharaj, Van der Dussen, Dwaine Pretorius and Reeza Hendricks are already inside the bubble while Quinton de Kock, Kagiso Rabada and others have recently joined them inside after the IPL.

Mark Boucher is overseeing the operation as head coach, while other previous Proteas JP Duminy and Charl Langeveldt are on the coaching staff.

The staff are all still relatively new to the job, but performances and results in 2021 show that South Africa’s trajectory may be on the up.

Victories in both Test and T20 series in the Caribbean were followed by T20 whitewashes of Ireland and Sri Lanka in July and September, suggesting that the squad is benefitting from approaching a major tournament with an extra 12 months of development behind them.

“We’ve had a good year. We’ve been in different conditions and we’ve adapted really well. A year ago, we were certainly less experienced. We’re in a good place now,” said van der Dussen.

Captaincy has been changing hands in the South African team of late. Temba Bavuma is the latest to sit on the chair when the music got off in March. South Africa hasn’t fared well since then and results haven’t been good.

“It came as a surprise to me. There was plenty of initial anxiety and fear, I guess, as to how I could take the team to new heights, but actually, I’ve really enjoyed it. I’m lucky that I’ve played with lots of the guys from the school level so the understanding is there and the respect is there. I feel that they are behind me,” said Bavuma.

He made his debut when South African greats AB de Villiers, Morne Morkel and Hashim Amla were around. And he seeks inspiration from them.

“I draw a lot of inspiration from Amla, particularly. He is similar to me as a player, too, in the sense that he wasn’t considered a classic T20 player but remodelled his game. Playing with these guys and watching them prepare has given me great experience to pass onto the rest of the squad,” he admitted.

Meanwhile, Van der Dussen is certain that mental preparation is as important as physical keeping the upcoming busy weeks in mind.

“You put in all the hours that you need to. And then on game night, it’s pretty intense. I get my practice done and then mentally switch off so that next time I’m on the field my mind is 100 per cent ready to go,” admitted Dussen, who is believed to be South Africa’s top batter in the T20 World Cup 2021 in the UAE.

South Africa isn’t in an easy group. Australia, England and West Indies were strong teams in group 1 before Sri Lanka and Bangladesh joined them to cap off the group of death. South Africa, though, will try to stay afloat and remind the world of their cricketing prowess.