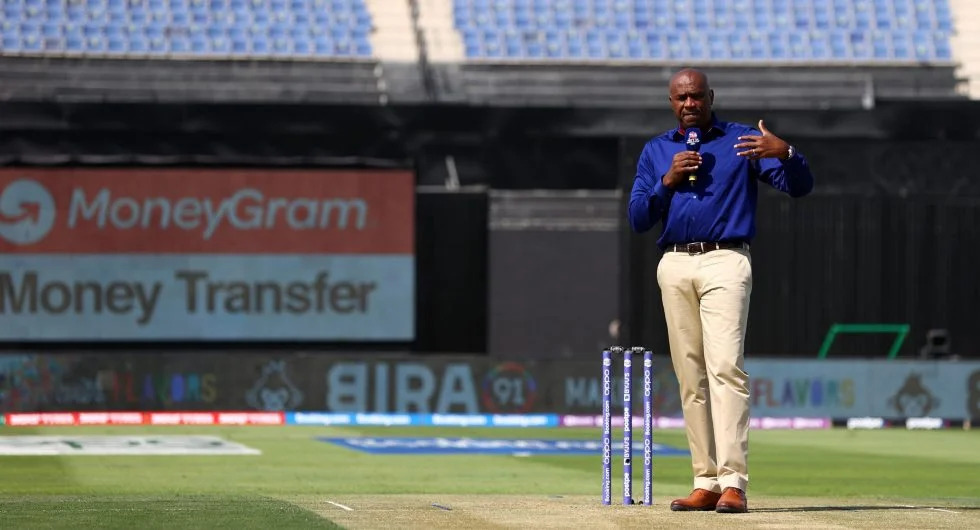 Former Caribbean pacer, Ian Bishop is one of the most popular commentators around the world. Recently, during a conversation with betway.com, he discussed how T20 cricket blossomed in the Caribbean and also recalls his iconic commentary of the 2016 World T20 final. However, he reckons that phenomenal players like Carlos Brathwaite make those moments.

In the 2016 World T20 final, Brathwaite look West Indies over the line with a couple of balls to spare when they needed 19 from their final over against England. Yet Bishop’s commentary is almost as fondly remembered as the feat itself, declaring: “Carlos Brathwaite! Carlos Brathwaite! Remember the name!”

Reminiscing his iconic line, Ian Bishop said, “I went to a function hosted by a friend of mine two days before the final. And one of the questions posed was which players we should look forward to watching in the final, beyond the obvious guys like Chris Gayle and Dwayne Bravo. Carlos Brathwaite came to my mind because in that World Cup he’d been bowling well and he could smack the ball. I said to the guy: ‘Carlos Brathwaite is a good all-around cricketer, remember that name’.”

He further elaborated, “I wasn’t the lead commentator at the time, it was David [‘Bumble’] Lloyd. I was just waiting to see how the action played out and then David tapped me on the shoulder and said: ‘Please, you go ahead. When he hit the final six, the first thing that regurgitated was what I’d said to that gentleman.”

Even though every cricket fan remembers Bishop’s voice while recalling the T20 World Cup 20216 final, he prefers to downplay his role. He said, “It’s embarrassing to talk about it. Honestly, no line is great unless the action on the field justifies it.”

Apart from that iconic line, Ian Bishop has been an authoritative voice on global cricket for several years. With the emergence of T20 cricket, not only players, but the broadcasters are also getting additional opportunities. However, a lot of commentators haven’t got the opportunity to play the format.

Talking about the T20 revolution among broadcasters, Bishop said, “ I’m very open to research and talking to guys who played T20, and I think I’ve learned a lot about it by covering it so often. As a player, I always wanted to do better. I got a five-fer, for example, because, instead of celebrating it, I would be thinking about how I can get the next one.”

The shortest format of the game seek validation around the world in the mid-2000s when it started becoming mainstream. But, although Bishop admits that, initially, he “did not know what to make of it”, he now gets frustrated by arguments that it is any less pure than other formats. He also feels that apart from the money and entertainment, T20 cricket has tactical nuances as well.

Ian Bishop explained, “I always accepted that I was paid more during my time than the generation before me. I am happy to see guys and girls secure their financial future. Dwayne Bravo, Kieron Pollard, Chris Gayle. These are great T20 cricketers and that makes them great cricketers in their own right. There’s room for everyone.”

It’s no coincidence that Ian Bishop picked Bravo, Gayle, and Pollard as the greats of the format as they have been the reason behind the West Indies winning two of the last three World Cups. During a period when not a lot of players were eager to opt for cricket as a career in the Caribbean, T20 has kept cricket in the region alive.

With Gayle, Pollard and Bravo are on the verge of calling it a day, the 2021 World Cup represents their chance to establish themselves as the undisputed T20 kings.

Ian Bishop explained, “We have to be realistic, there are lots of contenders. England has got guys who are aggressive with the bat. India has stars throughout its line-up. New Zealand is beginning to hit more boundaries and have a dangerous bowling attack. Pakistan is dangerous with the ball. But the West Indies have so much experience now, so I have my fingers crossed that they can go well.”

If West Indies managed to win their second consecutive title in T20 World Cup 2021, one can be certain that Ian Bishop will find the perfect line which will be synonymous with the moment.