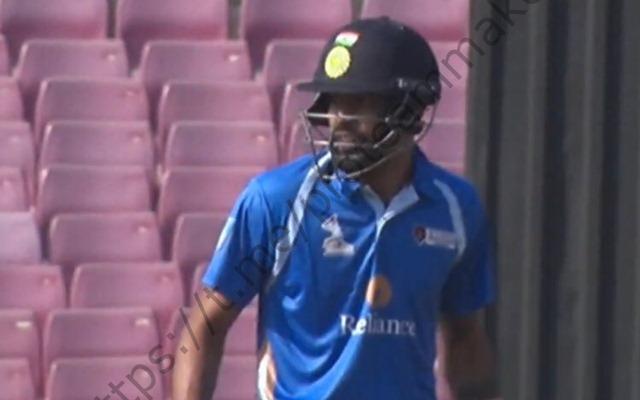 On a comeback trail, Mumbai Indians all-rounder Hardik Pandya smashed his way to a sensational 105 in just 39 balls for Reliance 1 in the DY Patil T20 Cup on Friday.

Hardik, who returned to competitive cricket last week after undergoing back surgery, slammed eight fours and 10 sixes in his sizzling innings as Reliance 1 posted 252 for five against CAG in the Group C encounter.

So good to be back out there on the field where I belong 😊 Your support keeps me going 🙏 pic.twitter.com/5UBjJ7HbW0

Playing his second match post-surgery, Pandya also claimed five wickets in a splendid all-round show as Reliance 1 bowled out CAG for 151 to claim a 101 run win in its final league match at the Reliance Corporate Park in Ghansoli.

This is my second game after a long time. “For me, it is a good platform to see where I am currently and test my body. I am really happy with the way things have gone,” Hardik said on DY Patil Sports Academy Facebook page.

Good win today 💪 Getting into the groove day by day. pic.twitter.com/5YaPRjJIQn

On his big-hitting prowess, the 26-year-old added: “If it’s there in my arc I just back myself and go for it. Most of the time, it comes out pretty well. There is no plan that I am going to go out there and smash it.”

The sensational performance of the all-rounder from Baroda was watched by the chairman of selectors MSK Prasad.

During his 39-ball stay at the crease, #HardikPandya smashed eight fours and 10 towering sixes, helping his side post a mammoth 252/5 in 20 overs#DYPatilT20Cup https://t.co/rlS5AzmjBG

Pandya has been on the road to recovery after going under the knife following a lower-back injury five months ago.

The 26-year-old, who missed out on the New Zealand tour, had started bowling at the National Cricket Academy (NCA) in Bengaluru after returning from a check-up in the UK.

Earlier in the day, Western Railway chased down Canara Bank’s 174-7 in just 13.1 overs to seal their quarter-final place.

How to watch IPL 2020 also known as IPL Corona Virus