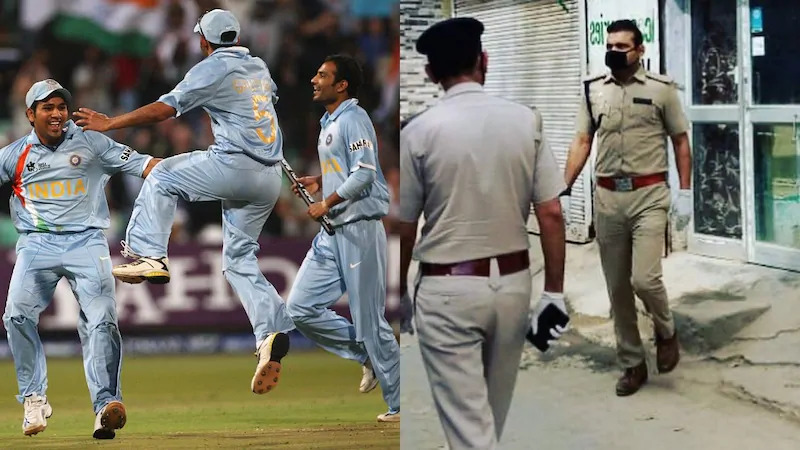 As per the order of our prime minister, India is now under the lockdown for 21 days to stop the spreading of Coronavirus. Though all the people are at home to protect themselves from the dangerous virus, doctors and cops are striving to save us from the virus. They are rightly called real heroes or superheroes of the country. In this time, the picture of a cop goes viral who is none but a former cricketer and World Cup hero Joginder Sharma.

Sharma is a former cricketer who is well known for his superb bowling in the final match of the final over of the T20 World Cup 2007. In which, he defeated the Pakistani batsman Misbah-ul-Haq. It was a crucial wicket for the team India. Because of this important wicket, India won the T20 Cup by 5 runs.

He became a cop after retiring from professional cricket. He joined the Haryana police force in 2016 and currently serves as a Deputy Superintendent of Police.

Sharma goes viral on social media after he was seen carrying out his duties as a cop wearing masks amid the Coronavirus crisis.

After his pictures gone viral on social media, the International Cricket Council (ICC) appreciated him by posting his picture on twitter. It was a collage of two pictures, in the first photo Sharma can be seen celebrating the T20 victory with his teammates while in the other one he can be seen in police uniform with the mask. And it was captioned as “2007: #T20WorldCup hero. 2020: Real-world hero. In his post-cricket career as a policeman, India’s Joginder Sharma is among those doing their bit amid a global health crisis.”

It’s time to execute restless duties for the nation,not only us but I request you all to be equivalent to us in maintaining social distance and be at your home, It’s time for all to prove ourself a real Patriot.And real patriotism is now in fighting simultaneously with COVID-19. pic.twitter.com/iuJe46ecg1